Skip to main content
Vermont Law School will continue with virtual classes during the fall semester. The physical campus will reopen as soon as it is safe to do so. VLS community members should check their email for more information. Please visit vermontlaw.edu/covid19 for general information, resources, and updates.
News Release 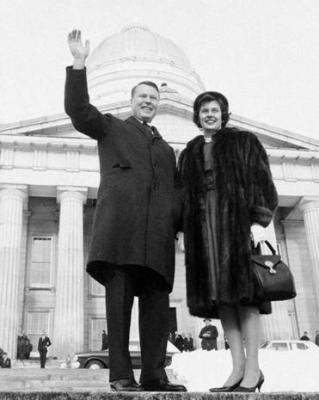 Associated Press / In this 1963 file photo, Phil Hoff, with wife Joan, waves in front of the Vermont State House in Montpelier.

—Vermont Law School mourns the passing of Trustee Emeritus Phil Hoff, the groundbreaking former Vermont governor who transformed the state and who also served as a longtime VLS Board of Trustees member, fondly remembered on campus as a protector of the school’s unique approach to legal education. Hoff passed away Thursday, April 26, in Shelburne. He was 93.

“Phil Hoff’s legacy is marked by inspired leadership and commitment to civil rights and social justice issues,” said VLS President and Dean Thomas McHenry. “For many years he served on the VLS Board of Trustees, including as president of the board, and is remembered for his kindness and generosity. Our thoughts and prayers are with the Hoff family.”

“Phil was a great guy—very down to earth, smart, engaging—and had a real affection for Vermont Law School,” said VLS Trustee Glenn Berger JD’78. “We are thankful for Phil’s many contributions to the VLS community.”

Associate Dean for Environmental Programs David Mears JD/MSEL’91, who served as a student trustee during Hoff’s tenure as president of the board, recalls the former governor’s commitment to the VLS mission. “Phil Hoff listened to the student and alumni representatives to the board, and allowed our voices to be heard as we argued to protect Vermont Law School’s unique approach to legal education.”

Hoff made history in 1962 when he was elected Vermont’s first Democratic governor since 1853. His political career began in 1960 when he was elected to the Vermont House of Representatives, where he gained influence as part of a freshman caucus known as the “Young Turks.” Hoff’s success as governor was confirmed as he pioneered unprecedented environmental, development, and social welfare programs and was reelected in 1964 and 1966. His many accomplishments included ending the outdated Overseer of the Poor system of welfare administration, and founding the Vermont District Court, the Judicial Nominating Board, the Vermont State Housing Authority, and Vermont Student Assistance Corporation (VSAC).

Concerned about racial justice, Hoff, with New York City Mayor John Lindsay, co-founded the Vermont-New York Youth Project, which brought minority students from the city together with Vermont students to work on joint summer projects at several Vermont colleges. Hoff remained active in politics, running for the United States Senate in 1970 and then serving as an adviser to New York City Mayor Abe Beame. In 1982, he returned to elective politics, serving three terms in the Vermont State Senate from 1982-1988. While in the Senate, he revitalized the Vermont Human Rights Commission and served for many years on the Vermont Advisory Commission to the United States Civil Rights Commission.

In 2008, Hoff received the Marc vanderHeyden Service to Vermont Award. Given by the Vermont Campus Compact Board of Directors, the award recognizes a distinguished individual with ties to Vermont who, through his or her actions, scholarly or professional work, and/or sustained civic engagement, has influenced, inspired and motivated others. Hoff remained committed to education, serving as a trustee of both Vermont Law School and Williams College.

Hoff’s legal career began in 1951, after graduating from Cornell Law School and moving to Burlington with his wife, Joan Brower. He was born in Turner Falls, Mass., and received his undergraduate degree in 1948 from Williams College after seeing combat during World War II in the Navy’s submarine service in the South Pacific.

A memorial service for Phil Hoff will be held at 11 a.m. Saturday, May 12, at the Cathedral Church of St. Paul in Burlington. In lieu of flowers, the family asks that any gifts in his memory be sent to the Southern Poverty Law Center, The Nature Conservancy, Vermont Law School, or Williams College.