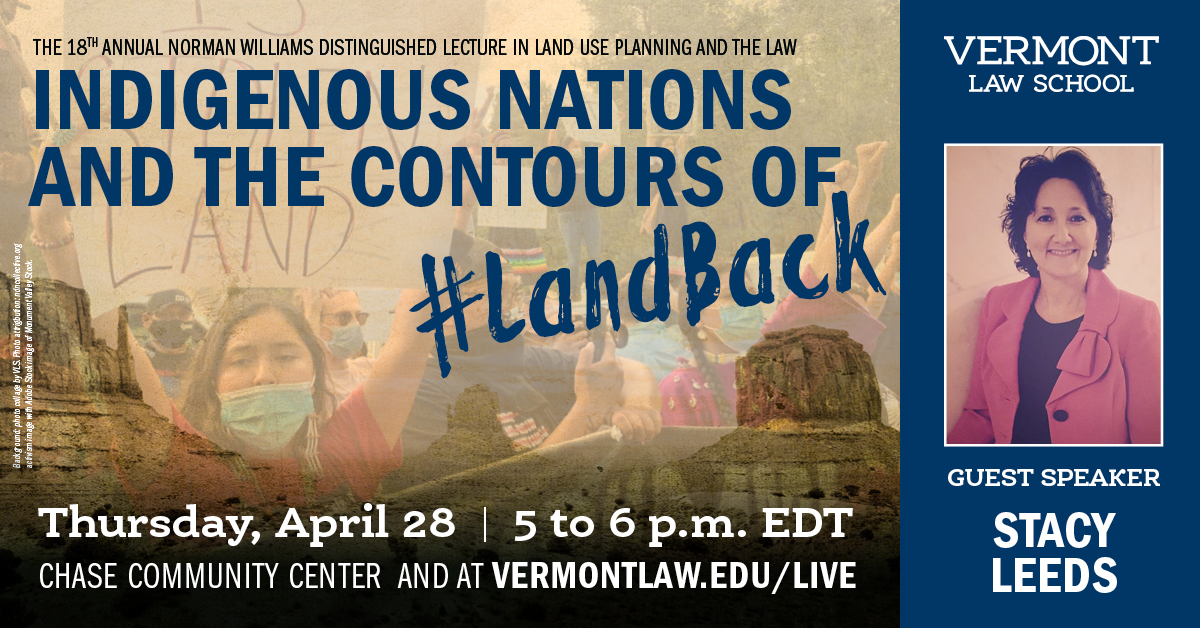 Stacy Leeds, Foundation Professor of Law and Leadership at the Sandra Day O'Connor College of Law at Arizona State University, will deliver Vermont Law School’s 18th annual Norman Williams Distinguished Lecture in Land Use Planning and the Law. The lecture, free and open to the public and press, will be held at Vermont Law School’s Chase Center and streamed at vermontlaw.edu/live on Thursday, April 28, from 5 to 6 p.m.

As Indigenous nations reclaim authority to regulate lands within their territories, questions arise about the implications for land use planning, regulatory conflicts, jurisdictional determinations, and more. Titled “Indigenous Nations and the Contours of #LandBack,” Leeds’s talk will explore these questions as well as the laws of Indigenous nations, the domestic laws of the United States, and trends in international law.

Professor Leeds is an educator and scholar of Indigenous law and policy and an experienced leader in law, higher education, governance, economic development, and conflict resolution. She is dean emeritus, University of Arkansas School of Law, and the first Indigenous woman to lead a law school. She has also served as the inaugural vice chancellor for economic development at the University of Arkansas and director of the Tribal Law & Government Center at the University of Kansas and Northern Plains Indian Law Center at the University of North Dakota. She is an elected member of the American Law Institute and a recipient of the American Bar Association’s Spirit of Excellence Award.

“Professor Leeds is a true trailblazer in Indigenous law and policy,” said Vermont Law School Associate Dean and Environmental Law Center Director Jenny Rushlow. “We are honored that she will be joining us for this year’s land use lecture, and look forward to hearing her insights on the Land Back movement and the growing call to transfer decision-making power over land back to Indigenous nations."

The Norman Williams Distinguished Lecture in Land Use Planning and the Law series is named for Norman Williams, who came to Vermont Law School in 1975 after a long and distinguished career in public service and teaching, particularly in the area of land use planning. Professor Williams played a key role in founding the Environmental Law Center. The lecture series is a gift of Frances Yates, trustee of VLS, in memory of Professor Williams, Charles Yates JD’93, and Anya Yates JD’94.