• This Event was also streamed LIVE • 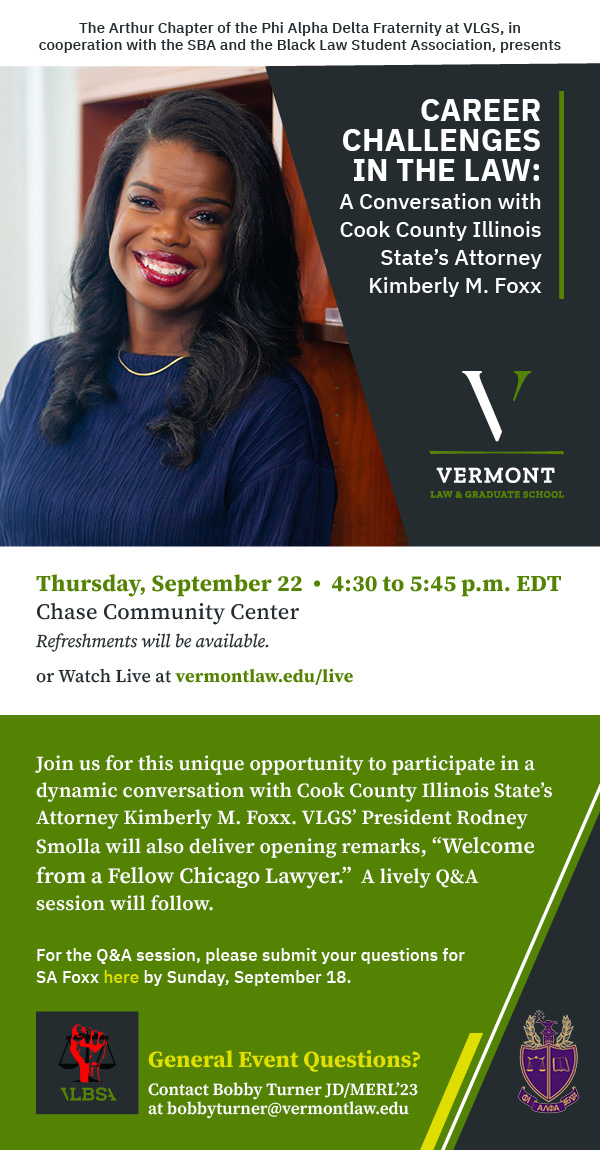 Kimberly M. Foxx is the first African American woman to lead the Cook County State’s Attorney’s Office – the second largest prosecutor’s office in the country. Kim took office on December 1, 2016 with a vision for transforming the Cook County State’s Attorney’s Office into a fairer, more forward-thinking agency focused on rebuilding the public trust, promoting transparency, and being proactive in making all communities safe. She was elected for a second term in 2020.

As Cook County State’s Attorney, Kim has undertaken substantial criminal justice reforms focused on public safety and equity. She has revamped the office’s Conviction Integrity Unit, resulting in overturned convictions in over 175 cases, including the first-ever mass exoneration in Cook County for 15 men whose convictions stemmed from misconduct by a Chicago Police Officer. She has been a leader in bond reform, instructing prosecutors to agree to recognizance bonds where appropriate, and reviewing bond decisions in cases where people are detained because they are unable to pay bonds of $1,000 or less. Kim has taken the lead on prioritizing resources away from low-level offenses to focus on violent crime, including raising the threshold for approving felony charges for retail theft to $1,000, and declining to prosecute misdemeanor traffic offenses for failure to pay tickets and fines. Kim played a vital role in passing legislation to legalize cannabis and provide the broadest and most equitable conviction relief possible. Providing this relief is not only a critical part of righting the wrongs of the failed war on drugs that disproportionately harmed communities of color; it is also a statement of her values and commitment to justice for all.

Kim served as an assistant state’s attorney for 12 years, and was also a guardian ad litem, where she worked as an attorney advocating for children navigating the child welfare system. Prior to being elected state’s attorney, Kim served as chief of staff for the Cook County Board president, where she was the lead architect of the county’s criminal justice reform agenda to address racial disparities in the criminal and juvenile justice systems.

Born and raised in Cabrini Green on Chicago’s Near North Side, Kim is a graduate of Southern Illinois University, where she earned a BA in Political Science and a JD from the SIU School of Law.

This event was presented by

The Arthur Chapter of the Phi Alpha Delta Fraternity at VLGS, in cooperation with the Student Bar Association (SBA) and the Black Law Student Association