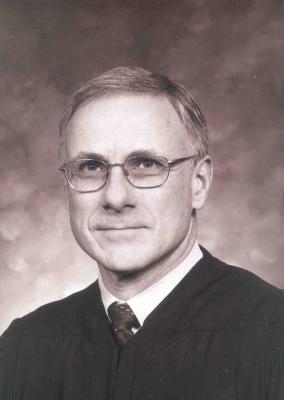 I am sad to inform the VLS community of Judge Peter Hall's passing last Thursday.

A giant of the Vermont legal community, Judge Hall was the lone Vermonter on the U.S. Court of Appeals for the Second Circuit and previously served as the U.S. attorney for Vermont, and president of the Vermont Bar Association.

And he was a valued, longtime friend of VLS. In addition to serving on our board of trustees for nearly a decade, he helped educate and launch the careers of countless students and alumni through clerkships and semester in practice, internship and externship programs.

Judge Hall received a B.A., with honors in English, in 1971 and an M.A. in student personnel administration in 1975, both from the University of North Carolina at Chapel Hill, where he was a Morehead Scholar. He received a J.D., cum laude, from Cornell Law School in 1977. Judge Hall was a member of the American Bar Association, the Vermont Bar Association, of which he was President from 1995 to 1996, and the Rutland County (Vermont) Bar Association. He was a Fellow of the American College of Trial Lawyers and from 2007 to 2016 Judge Hall was a delegate from the Federal Judges Association (in the United States) to the International Association of Judges.

Judge Hall's law clerks, family, friends, and colleagues are joining together to honor his legacy by funding a scholarship for exceptional VLS students. To learn more about this meaningful initiative and to donate, please click here.

Our thoughts and prayers are with Judge Hall’s family. He was a tremendous source of inspiration to our students and faculty, and we will long remember him for his service to our school, state, and country.

In honor of former Vermont Law School Trustee and U.S. Court of Appeals for the Second Circuit Judge Peter Hall, we ask alumni, faculty, staff, and others to share tributes to Judge Hall's contributions to VLS and the Vermont legal community. See the submission form at the bottom of this page.

***
Laura Colangelo Dumais:
"I will be forever deeply grateful to Judge Hall for his generosity in hosting externship students from VLS. My semester as an extern was the true highlight of my VLS experience, and I treasure the knowledge and skills I gained working in chambers and witnessing oral argument in New York. At the outset, I had no idea what to expect from such an important figure in our legal system, but Judge Hall was unfailingly kind, patient, helpful, and relatable. I am so sad to hear of his passing, and I wish his family peace and comfort at this difficult time."

***
Tamara Toles O'Laughlin:
"Judge Hall was a consummate champion for Vermont Law School, with a wry sense of humor, and a keen eye on the school’s commitment to community, he embodied the spirit of a trustee and guarded the relationship of VLS to South Royalton as a portion of his service. Having known him largely as an alumna my family and I cherished the moments we were able to spend in his good company and mourn his passing along with many in our ever growing community of justice minded citizens for community and the world."

***
Cara Cookson:
"I met Judge Hall when I served as Student Trustee, and I was in awe at how much he cared about what I had to say. Despite his stature and great wisdom, he treated me like a valued colleague throughout my career in Vermont, which in turn, shaped how I saw myself. Years later, when I was the Pro Se Law Clerk for the District of Vermont, he would stop by chambers in Burlington from time to time. I watched the whole building light up, and it was clear to me how he brought out the best in everyone around him. I will miss him."

***
Peter Schmalz:
"When I was at VLS in the late 90s in the General Practice Program, we were invited to participate in the central Vermont chapter of the Inns Of Court (monthly dinners and discussion programs bringing together members of the bar). As a student, Judge Hall was always incredibly welcoming to students and shared wonderful insights that helped me put law and ethics into the context of real-life law practice. Practicing in Rutland after graduation, and eventually in the federal government, I came to even more fully appreciate Judge Hall's reputation and dedication. From the early years of my career, to the present day, I can't think of many lawyers/judges so universally respected. He set a high bar that we should all aspire to meet."