Welcome to EJ Clinic Conversations, a series in which Environmental Justice Clinic student teams interview clients and partners from across the country. Today's post features Father Philip Schmitter, former head of the St. Francis Prayer Center, and an activist against environmental pollution and injustice in Flint, Michigan.

The Black Lives Matter movement and the spread of COVID have once again raised the question: How much pollution can a community tolerate? How much pollution should a community tolerate? As a research assistant for Professor Marianne Engelman-Lado at Vermont Law School, I have studied and analyzed information concerning the struggles of the residents of Flint, Michigan. Back in the 1990’s, residents of this city had to challenge decisions by the state government to approve the siting of two facilities, Genesee Power Station and Select Steel. The state’s decision to grant permits to these two facilities in an already overburdened neighborhood in Flint sparked civil rights complaints filed with the Environmental Protection Agency (EPA). 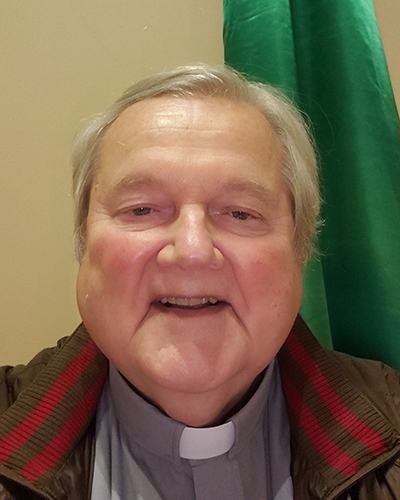 I had the opportunity to interview Father Philip Schmitter, former head of the St. Francis Prayer Center, and an activist against environmental pollution and injustice in Flint. Father Phil expressed the anger and frustration he felt as he witnessed the accumulation of pollution in the city. As background, Flint had once been a mecca of capitalism as the home of General Motors, but after its departure “Automobile City” suffered from a rapid economic downfall. As expressed by Father Phil, the company had reduced production so significantly that there were “about 80,000 jobs when I came and there’s about 8,000 now, so about 90% of the jobs were gone.” The economic downfall was also accompanied by what is called “white flight” after World War II, when a significant portion of Flint’s white population moved to the suburbs, leaving a diverse, but lower-income and predominantly African-American population in the city.

Under these circumstances, in 1992 a company called CMS Energy proposed Genesee Power Station. The proposal called for placing a wood incinerator in a residential area and near an elementary school in North Flint. As previous scholars have written, the project threatened to add to the air pollution in the neighborhood and provided few, if any, benefits for the community, with limited employment opportunities and a lack of community programs. The proposal provoked outrage and action spearheaded by Father Phil and Sister Joanne Chiaverini, also a leader at the St. Francis Prayer Center. They argued that the public hearing process and the proposal itself discriminated on the basis of race and consequently filed two letters of complaint with the EPA, detailing the relevant evidence.

The St. Francis Prayer Center argued that the state’s approval of the permit violated Title VI of the Civil Rights Act of 1964, which prohibits any program or activity that receives federal funds from discriminating on the basis of race, color, or national origin. They alleged that the state’s actions intentionally discriminated and that the approval of the permit would have an unjustified disproportionate impact on the basis of race. As an example, they complained that the public hearing that was supposed to provide an opportunity for community input was held about 60 miles away, in Lansing, and was inaccessible for the people who would be most affected by the facility.

"we begin to awaken to the fact that sources of pollution can often fall in the cracks between state, local and federal government, so no one really oversees anything."
– Father Philip Schmitter

Nonetheless, the state agency that is now called Environment, Great Lakes & Energy (EGLE) granted a permit for the construction and operation of the Power Station. Meanwhile, the EPA accepted the complaint for investigation in 1995 but then failed to complete its investigation. The frustration of the community of Flint grew with every year of neglect by EPA. As expressed by Father Phil, “we begin to awaken to the fact that sources of pollution can often fall in the cracks between state, local and federal government, so no one really oversees anything.”

A few years later, in May of 1998, Dunn Industrial Group proposed siting yet another facility in Flint, a steel processing factory named Select Steel. Given the possibility that an additional noxious facility would be allowed to operate in the same residential area of Flint, members of the community once again rose into action and Father Phil and Sister Joanne filed another complaint on June 9, 1998 with the Office of Civil Rights of the EPA. Having harnessed more attention from the general public and spiking controversy, the EPA promptly responded for the first time to a civil rights complaint on October 30, 1998, responding in 143 days, while still ignoring the Genesee Power Station complaint. In Father Phil’s words, “we were not prone to going away quietly.”

However, EPA dismissed the Select Steel complaint, stating that the facility wouldn’t harm the community – even though it would be allowed to spew mercury and lead into the air – because the new facility would be in compliance with federal air quality standards. The residents appealed the decision.  They ultimately achieved at least part of their objective:  in part because of the delays caused public opposition, Select Steel decided to relocate the project to Lansing, Michigan.

At the same time, EPA continued to let dust settle on the Genesee Power Station complaint, which was still pending more than twenty years after it was filed. Power Station was built and was operating. Then, in 2015, the St. Francis Prayer Center joined other communities across the country that were also waiting for EPA to act on long ago filed civil rights complaints.  Together, they filed a complaint in federal court alleging that EPA violated its duty to conduct investigations and issue preliminary findings on complaints within 180 days.

On January 19, 2017, two years after the court case was filed, EPA finally ruled on the Genesee Power Station complaint. The Obama administration issued this decision on its last day, finding that the state of Michigan had discriminated on the basis of race. EPA’s decision found “that the preponderance of evidence supports a finding of discriminatory treatment of African Americans by [EGLE] in the public participation process for the GPS permit considered and issued from 1992 to 1994.”  In addition, EPA also expressed concerns that the state’s policies in 2017 remained “insufficient to address the potential for discrimination.” However, as Father Phil remarked, the “decision didn’t have a lot of teeth,” leaving the residents to wonder, now what?

The final tipping point for Flint famously occurred on April 25, 2014, when city officials and an appointed emergency manager decided to change the city’s water source to the Flint River in order to reduce costs, as the city continued in an economic crisis. Flint’s drinking water was contaminated by eroded pipelines, which led to excessively high blood lead levels of in children and in adults, as well as other related medical conditions. Government officials disregarded community complaints even as the evidence accumulated, with doctors, scientists, and journalists stating the obvious: the water was toxic. This became internationally known as the Flint Water Crisis.

The residents once more sprang into action. Through lawsuits, relentless requests to the EPA, and additional legal actions, the residents obtained bottled water. Officials finally recognized the toxicity of the water and, after the political crisis that ensued, began plans to repair the pipes. More recently, the actions taken by Flint’s residents resulted in a for victims of the Flint Water Crisis. However, this settlement served poorly to suppress the damage done.

The course of events in Flint showcases the need for environmental justice and for addressing discrimination in environmental decision-making. This situation grows even more urgent with the COVID-19 pandemic and the Black Lives Matter movement. Communities that were vulnerable pre-pandemic because they bear a disproportionate share of air and water contamination are even more vulnerable to the pandemic and the economic downturn. These communities are often the target of multiple-source pollution that hinder adequate access to basic necessities and ravage their homes. As stated by Father Phil, “we live in a democratic society, and there are certain people having to carry the burden of pollution more than others and it shouldn’t be this way.”