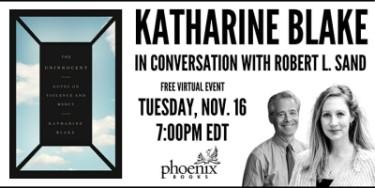 In her newly published book, The Uninnocent: Notes on Violence and Mercy, VLS Adjunct Professor Katharine Blake explores the aftermath of a crime that changed her family, and career, forever. The crime? Her 16-year old cousin’s seemingly random murder of a nine-year old boy while suffering from a “psychotic break.”

The book, billed as a “harrowing intellectual reckoning with crime, mercy, justice and heartbreak through the lens of a murder,” was released earlier this month by FSG Originals and has been touted by Buzzfeed as one of 25 “New And Upcoming Books You Won’t Be Able To Put Down.”

Readers interested in learning more about the book are encouraged to attend a special discussion between Blake and Robert Sand, a VLS professor of law and founder of its Center for Justice Reform. Hosted by Phoenix Books, the free, zoom-based event will take place on Tuesday, Nov. 16, at 7 p.m. To register for the event, click here.

In the lead up to the event, VLS had the opportunity to discuss the book with Blake, learning more about her struggles with writing about such a personal matter, how the tragedy changed her career direction, and what she hopes the book will accomplish.

In your book you focus on a tragedy that took place in your family. How did you get comfortable with the idea of telling such a personal story?

Katharine Blake: Actually, I don’t think I ever did get comfortable with telling this personal story. As I was writing it, I had to tell myself I might not publish it. I committed to finishing the book, but in order to do so, I had to leave the publishing as an open question. And now that it’s out, I still don’t feel comfortable, if I really let myself think about it. My sense is that this is true of many writers. But ultimately it comes down to a matter of principle. In principle, I believe that we are set free by telling the truth—our own truths, and by reading other people’s true stories. When we find ourselves in the pages of a book, we know we’re not alone. It may lessen the shame. I want to be engaged with this work of freedom and un-shame. So the risk and pain associated with publishing personal stories felt worth the promises of this larger work.

The tragedy occurred while you were already in law school, so you were clearly already interested in the law, but do you think it changed your career path in any way?

Blake: Absolutely. It changed so much about what seemed to matter. After my cousin’s crime, I signed up for juvenile justice and started teaching at a juvenile detention center. Much of the “theater” of the law and legal education felt hollow compared to the real ways in which the law was deciding families’ fates. I couldn’t get myself to care about moot court, law review, clerkships, which is not to say that these activities are actually hollow—they are valuable for training future advocates—only that they felt hollow to me then. I got involved in a legal clinic that offered direct services to the community, and that’s where I felt at home because it was immersed in the world of real stakes. My first job out of law school was at the Children’s Defense Fund. This was not coincidental.

Writing a book seems like a difficult enough task, let alone getting it published. Can you describe the process you used to write the book and the effort to find a publisher?

Blake: My path toward publication was fairly standard: I submitted my book proposal to an agent, and then my agent sent it out to prospective publishers. It got rejected by a handful of places and then accepted by one. We stopped there. All it takes is one person saying yes. You can’t let all the NO’s deter you, or hurt your feelings. It’s not personal, even when your writing is personal. In terms of writing, I think the best thing I had going for me was stubbornness and an unwillingness to quit before I was finished. Basically, I believe that everyone has a story in them, true or fictional, that would make a beautiful book. But writing is really hard and boring most of the time. So keeping going through the boring parts, the times when you want to stop because it’s too hard, is the only thing you have to do. One of the texts I always assign to my students is Anne Lammot’s Shitty First Drafts, from Bird by Bird. The point is: it’s okay for your first draft to be terrible because you can edit it and make it better. But if you never finish that first draft, you will never write a book. It’s the only nonnegotiable.

What do you hope the book will accomplish?

Blake: We have a tendency to understand violent crime only from the victim’s perspective. This is what animates so much of our extreme sentencing and reliance on incarceration. We think, “If someone murdered my child, I’d want to kill them.” Of course this is true. But it is also true that your child—my child—might one day be on the other side of this equation. Mental illness, tragedy, accident—these experiences don’t discriminate based on how “good” a person I might try to be. We are all eligible. If this book could open up some space around our notions of “innocence” and “guilt,” I’d be grateful.

But more broadly, I simply hope this book finds who it’s meant to find. One of its underlying conclusions is the notion made famous recently by the attorney and advocate Bryan Stevenson: that we are all more than the worst thing we’ve done. This is true of people who commit murder. It’s true of all who struggle with life on life’s terms. And, ultimately, this is a message of mercy. Our criminal legal system is steeped in a mercilessness that hurts us all. And so if the message of mercy could work its way through even a tiny group of peoples’ hearts who read the book, I will feel that’s enough an accomplishment.