Skip to main content
Vermont Law School will continue with virtual classes during the summer session. The physical campus will reopen as soon as it is safe to do so. VLS community members should check their email for more information. Please visit vermontlaw.edu/covid19 for general information, resources, and updates.

When the ENRLC opened its doors in 2003, one of the first cases we accepted involved the representation of a grassroots group of citizens called Residents Concerned about Omya (RCO). Omya is a Swiss corporation that operates a marble quarry and mineral processing facility in Florence, Vermont. RCO's members, who lived close to Omya's operations, had been living with the odors, noise, dust, traffic, and potential groundwater contamination emanating from Omya's operations. Though Omya was dumping large volumes of industrial waste into unlined open pits in contact with the groundwater, Vermont's Department of Environmental Conservation had granted Omya an exemption from regulation under the state's solid waste laws. The waste contained a variety of industrial chemicals, some of which had not been disclosed to the public or the agency. Nor had they been analyzed to determine their toxicity. This method of waste disposal had been going on for years and had resulted in enormous piles of waste growing larger every day.

Since their homes and drinking water wells lay down-gradient from the waste piles, members of RCO were understandably concerned about what was in the waste, whether it could leach into the groundwater, and why the state was not regulating it. 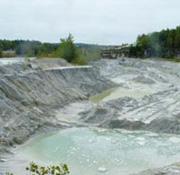 One of the first things the Clinic did was file a Petition for a Declaratory Ruling with DEC seeking a ruling that Omya's waste was not exempt under the Vermont Solid Waste Management Regulations. In response, DEC issued a determination that Omya's waste should be regulated, but the ruling was limited to the disposal of future waste. So the problem remained. The Clinic also sought an Order in federal court prohibiting Omya from dumping the waste in open pits pending the issuance of a proper solid waste facility certification.

Over the succeeding years a large number of student clinicians, fellows, and staff attorneys worked on the case. Here are some of the highlights.

At this point there are no pending legal actions against Omya. The long battle over the waste disposal is over, at least for now. Although the residents did not accomplish everything they had hoped for including the complete removal of all the waste on site, there is no question that things have greatly improved. The RCO v. Omya case has also provided a terrific learning opportunity for the many students who worked on various aspects of the case over the course of about a decade. Some of these clinicians appeared in federal court and presented expert testimony and cross-examined Omya's experts. Others drafted briefs and conducted discovery. Others learned how to file and argue a case in Vermont's unique Environmental Court. All of the clinicians had the opportunity to work with a wonderful group of clients and realize what a responsibility it is for a lawyer to represent individuals with a real stake in the outcome.

Complaint for Declaratory and Injunctive Relief (without attachments) (June 2005)