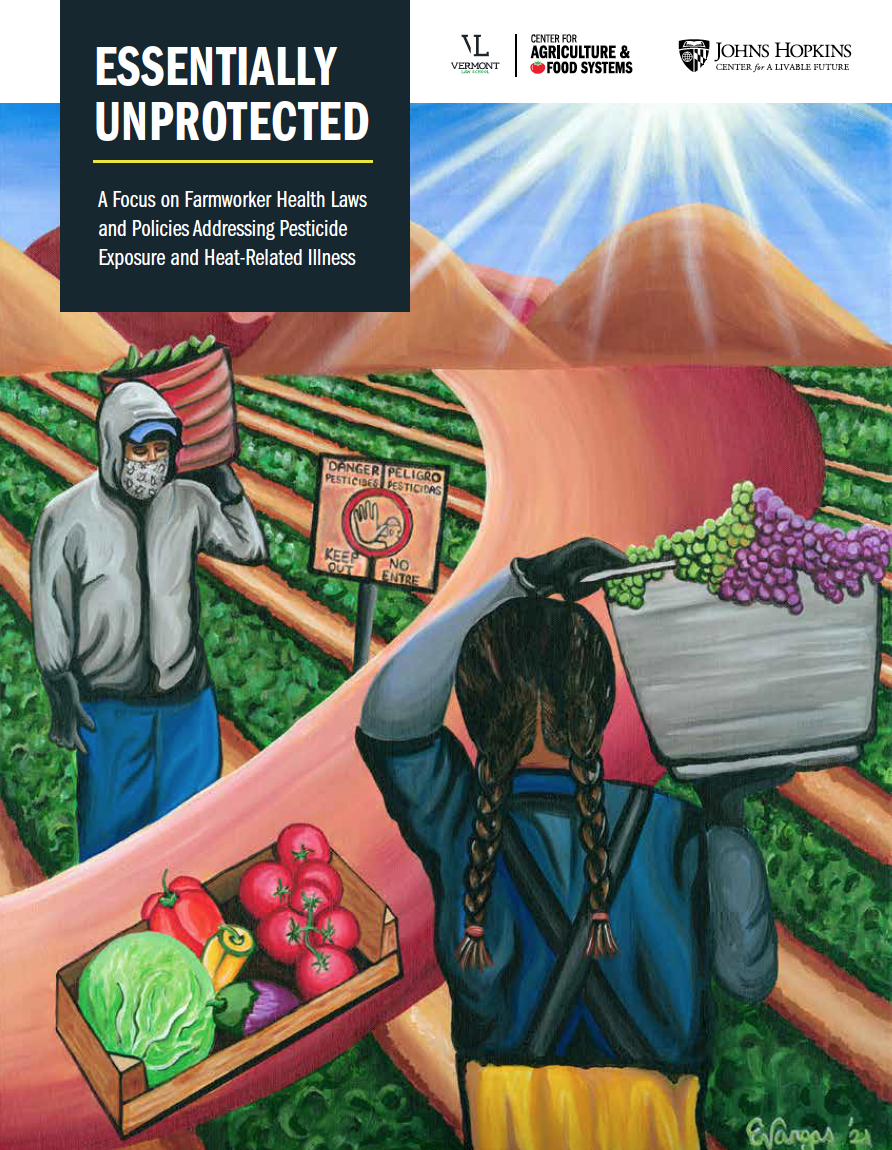 A new report from Vermont Law School’s Center for Agriculture and Food Systems (CAFS) reveals dangerous gaps in labor protections that put the health of agricultural workers at risk. Titled “Essentially Unprotected,” the report draws from a comprehensive overview of state and federal laws, offering policy recommendations to prevent and treat two of farmworkers’ most critical workplace hazards: pesticide exposure and heat-related illness.

Despite forming the backbone of a trillion-dollar industry in the United States, farmworkers face a level of occupational risk unrivaled by most workers. From repeated exposure to pesticides and extreme heat, to injures from machinery and repetitive motion, conditions on American farms involve myriad hazards. Meanwhile, a lack of access to healthcare and legal services, low wages, marginalization, language barriers, racism, and the threat of deportation among these largely immigrant communities compound their many challenges.

“Farmworkers are largely invisible to most Americans, as are their sacrifices and burdens,” said Laurie Beyranevand, director of CAFS and lead author of the report. “But the way that COVID-19 has wreaked disproportionate havoc among these ‘essential’ workers must force lawmakers to finally reckon with the inhumane realities of food production—not only the challenges these communities face, but how our labor laws and policies exacerbate them.”

“At the federal level, scant pesticide protections that do exist often focus on protecting the environment or communities other than farmworkers, who are most regularly exposed to them,” added Lihlani Skipper Nelson, associate director of CAFS, who led the research team and compiled the laws and regulations into a searchable database. “Meanwhile, outdoor work-related heat stress and illness has not been addressed at the federal level in any meaningful way.”

That leaves states to fill in the gaps. The strongest state measures focus on prevention; California, Hawaii, and Maryland, for example, have taken the initiative to ban chlorpyriphos, a particularly poisonous pesticide. Other states such as New York, Washington, and Louisiana have adopted measures to address pesticide drift, pesticide use and application, and/or pesticide medical monitoring, with varying degrees of success in enforcement. To date, only three states—California, Minnesota, and Washington—have adopted standards to combat heat-related illness.

To view the report and policy database, visit vermontlaw.edu/essentially-unprotected. The project is a collaboration between CAFS and the Center for a Livable Future (CLF) at Johns Hopkins University. Today, CLF released an accompanying report on public health issues faced by farmworkers titled “Essential and in Crisis: A Comprehensive Review of the Public Health Threats Facing Farmworkers in the US.”

“Regulations protecting farmworkers are patchwork at best, with a dire lack of federal oversight leaving states, local advocacy organizations, and farmworkers themselves to fill in the gaps,” Beyranevand said. “As climate change raises temperatures, contributing to increased hazards on farms, we need to confront this ever-growing public health crisis and ensure access to justice for the communities that sustain us.”