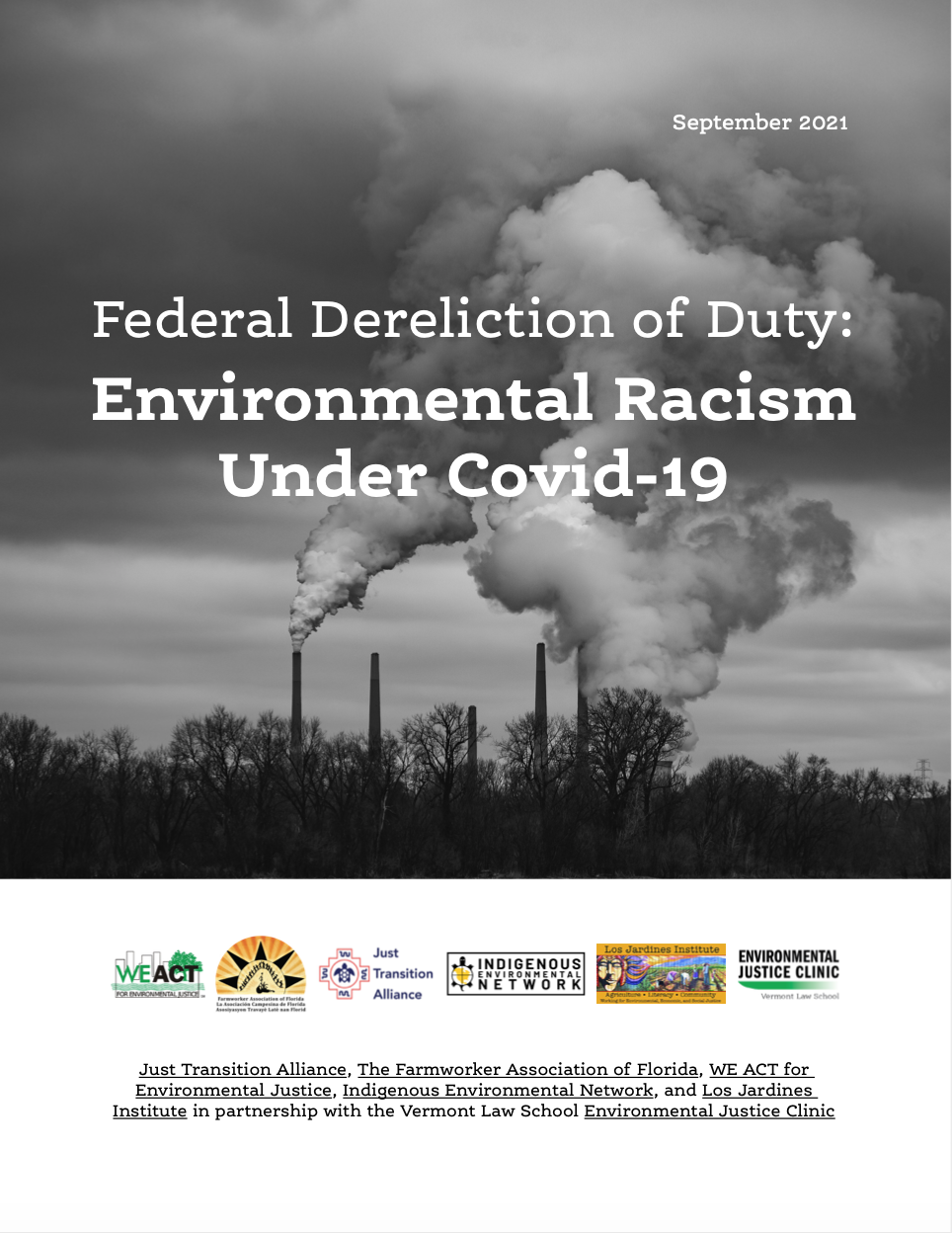 A new report released today exposes the Environmental Protection Agency’s contributions to the disproportionate impact of COVID-19 on People of Color, Indigenous Peoples, and low-income communities. "Federal Dereliction of Duty: Environmental Racism Under COVID-19" is the first in-depth analysis of the EPA’s failure to address the environmental injustice of its policy allowing polluting industries to “self-regulate,” just as evidence was mounting about the connections between toxic air pollution and severe illness and death from COVID-19.

The EPA, under former President Donald Trump, announced a dramatic deregulation of environmental monitoring and enforcement in March 2020, three days after a request in writing by the American Petroleum Institute, which represents 600 oil and gas companies. This deregulation policy lifted oversight on all federally-regulated sources of pollution, including chemical manufacturing, coal-fired power plants, mining and smelting, sewage and waste facilities, and factory farms. By June, the EPA had further eased regulations intended to protect farmworkers against pesticide exposure. In the meantime, multiple studies early in the pandemic demonstrated links between poor air quality and health risks from COVID-19.

“The EPA needs to do its job regardless of who is President,” said José T. Bravo, executive director of the Just Transition Alliance, a coalition of environmental justice and labor organizations, who contributed to the report along with Indigenous Environmental Network, the Farmworker Association of Florida, Los Jardines Institute, WE ACT, and the Vermont Law School Environmental Justice Clinic. “This report aims to draw attention to the federal government’s dereliction of duty so that this never happens again.”

“EPA’s decision to succumb to corporate pressure instead of protecting those most at risk from a public health crisis cannot happen again,” said Amy Laura Cahn, director of the Vermont Law School Environmental Justice Clinic and lead author of the report. “As COVID rates surge, we need systemic changes to ensure all federal agencies safeguard our communities—and that communities have the tools to protect themselves.”

A recently-published peer-reviewed study shows that EPA’s rollback led to specific and significant air pollution increases, with greater impacts in areas with higher concentrations of industrial sites. EPA’s own Office of Inspector General found an overall decline in enforcement in 2020, as compared to prior years, but a lack of data and transparency prevents communities from knowing the extent of the harm caused by EPA deregulation.

During the five-and-a-half months that this policy remained in effect, COVID-19 cases in the U.S. skyrocketed to a cumulative 6,163,027 cases. Research quickly showed disproportionate rates of infection, hospitalization, and deaths amongst Black, Latina/o, and Asian people. By fall 2020, the Navajo Nation faced a higher per capita death rate than any of the states in the U.S. To date, COVID-19 has infected at least 561,000 farmworkers, though that number is likely an underestimate.

Even before COVID-19, race was the greatest predictor of toxic waste sites across the nation. Black Americans are exposed to more pollution from all major emission sources, while Black and Latino/a residents are more likely to live near high risk chemical facilities. Indigenous nations contend with a proliferation of toxic contamination, mining, and fossil-fuel infrastructure on and near Tribal land, including waste emissions from fossil fuel extraction from the Navajo Nation lands. Farmworkers, who are 64% Latino/a and often immigrants, are disproportionately impacted by air and water pollution from industrial agriculture and exposure to harmful pesticides.

"Farmworkers are already among the least protected workers in the country,” said Jeannie Economos, pesticide safety and environmental health project coordinator at the Farmworker Association of Florida. “EPA's policy in the middle of a global pandemic only added insult to injury to these truly essential workers on whom we all depend for our food. We demand accountability for the hardships endured and the family members lost due to this negligence on the part of the Agency to vigorously enforce health and safety protections."

Longstanding environmental justice policy requires EPA to identify and address the impacts of its decisions on People of Color, Indigenous Peoples, and low income communities—and to include these communities in decision-making. This policy did the opposite. While EPA rescinded its policy on August 31, 2020, after lawsuits, Congressional hearings, and an internal EPA critique, the damage was done. One year later, communities are still left without the resources or data to hold the EPA accountable.

“We need accurate and timely information about dangerous pollution in our communities, particularly at a time when Black, Latino and Indigenous Peoples continue to experience more serious outcomes from illnesses that attack our respiratory systems and invade other functions within our bodies,” said Dana Johnson, director of federal policy at WE ACT for Environmental Justice. “We are calling on Congress to pass sweeping environmental justice legislation with fail safe provisions that prevent individuals like former EPA Administrator Andrew Wheeler from giving a free pass to polluters.”

"This is another example of environmental racism that our communities are consistently impacted by,” added Richard Moore, co-coordinator, Los Jardines Institute. “Now is the time to begin to dismantle systemic racism within all levels of government."