The Center for Agriculture and Food Systems (CAFS) at Vermont Law and Graduate School and national advocacy organization Farmworker Justice today released a report entitled " Exposed and At Risk: Opportunities to Strengthen Enforcement of Pesticide Regulations for Farmworker Safety," which analyzes the regulatory structure currently being used to protect farmworkers from the dangers of pesticide use in agriculture. 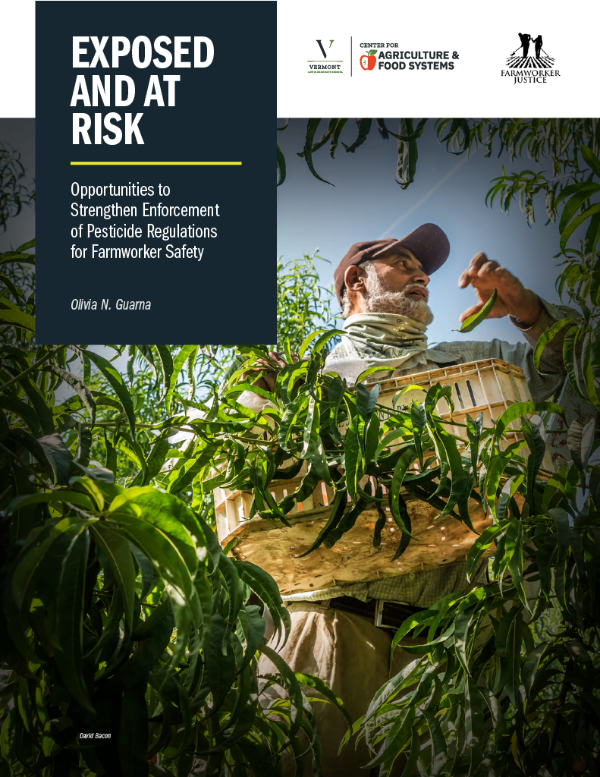 The report uses extensive research, interviews and stories from the field to document an extremely complex system of pesticide enforcement and illustrate how the cooperative agreement between federal and state agencies makes it nearly impossible to ensure implementation of the federal Worker Protection Standard.

“Farmworkers experience threats, risks, and extreme hardships across multiple categories that significantly threaten their health and safety,” said Laurie Beyranevand, CAFS Director. “They are the foundation of our food system, yet experience a regulatory system that often works against them, leaving them dangerously under-protected.”

"While pesticide safety rules have been in effect for decades, they must be enforced in order to truly protect farmworkers from the harmful effects of pesticides," says Alexis Guild, Director of Health Policy and Programs at Farmworker Justice. "Farmworkers deserve the same protections as all other workers, yet are constantly among the most exploited in this country. The gap between the protective laws and their implementation must be addressed moving forward." The report identifies gaps in pesticide safety enforcement and proposes a set of policy recommendations that were formulated with the lived experience of farmworkers in mind and are focused on addressing the structural flaws in the enforcement system. Specifically, the report recommends:

This report is the most recent installment of the Food System Worker Law and Policy Project, started in 2021 by the Center for Agriculture and Food Systems with a focus on the role of law and policy in protecting the health and safety of farmworkers. The Project’s first report, " Exposed and At Risk: Opportunities to Strengthen Enforcement of Pesticide Regulations for Farmworker Safety," explores current gaps in the U.S. law that put farmworkers at risk by failing to protect them, specifically against both pesticide exposure and heat-related illnesses.

With the release of “Exposed and At Risk: Opportunities to Strengthen Enforcement of Pesticide Regulations for Farmworker Safety,” the Food System Worker Law and Policy Project builds upon their previous research to expose how farmworkers remain unprotected even under the few existing laws enforcing pesticide use.

To view the report, visit vermontlaw.edu/pesticide-enforcement. This publication was made possible with support from the United States Department of Agriculture National Agricultural Library, Agricultural Research Service.

About Farmworker Justice: Farmworker Justice is a national nonprofit organization based in Washington, DC that seeks to empower farmworkers and their families to improve their living and working conditions, immigration status, health, occupational safety, and access to justice. Founded in 1981, FJ engages in advocacy, litigation, administrative monitoring, capacity building, health promotion, and public education. FJ works closely with national, state, and local partners. For more information, visit the Farmworker Justice website at www.farmworkerjustice.org or follow on Twitter at @FarmwrkrJustice.